Inovatica AGV autonomous forklift technology was awarded a gold medal at the International Trade Fair for Inventions and Innovations INTARG 2022.

The event took place in Katowice, on May 11-21, 2022. Companies and research&development units from Poland and abroad came to the Spodek in Katowice. Among the inventions submitted to the competition, there were also the autonomous Inovatica AGV forklifts. The competition jury especially appreciated the possibility of retrofitting, i.e. adapting an ordinary electric pallet truck to the standard of an autonomous vehicle. The software for locating and navigating the trolley based on the data from the lidar was also very impressive.

The Katowice fair was organized for the 15th time, and Industry 4.0 and Transport and logistics played an important role among the exhibition industries. The patrons and partners of the fair were, among others:

During the conference accompanying the fair, Inovatica presented a lecture entitled Significant implementation aspects of autonomous vehicles in warehouse and production halls. Promising business contacts were also obtained in the networking zone.
Participation in the event was possible thanks to the support from the project "Łódzkie dla Biznesu - Development on Plus" financed by the Regional Operational Program of the Lodzkie Voivodship for 2014-2020. Inovatica AGV presented its offer at the stand of the Marshal's Office of the Lodzkie Voivodship. 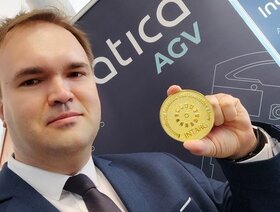