The autonomous forklift truck started its tasks in a modern factory in the household appliances industry.

Thanks to the several-month-long tests, we can confirm the efficiency of autonomous forklifts in everyday work in the production and warehouse hall. In the beginning, we took care of the smooth implementation process, which includes:

Two autonomous trucks take part in the tests. The vehicles are based on Crown brand structures, on which the Inovatica AGV hardware and software is implemented. As part of the test, the following are analyzed:

During the test period, the truck carries out all target tasks as in normal operation. It picks up pallets from the floor, rolltok or foliar and transports them to the warehouse or delivers the pallets from the warehouse to the production facility. In the absence of a current order, the trolley automatically parks in a designated place waiting for the process to resume. In the event of low battery capacity, the truck automatically drives to the battery room. It also checks the maximum capacity while the truck is in continuous operation 24/7. 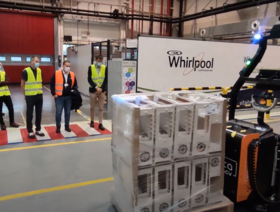